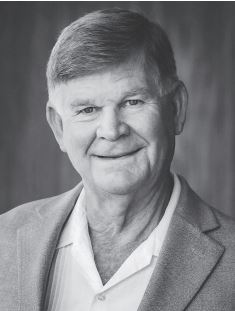 Alan Ruden was born in Boulder, Colorado. The family moved to Oceanside when his father accepted a job with the city. Alan attended K-12 schools in Oceanside, was a good student and excelled in basketball. He was an All-Conference guard, 4 times MVP and 2-time Defensive Player of the Year. His play continued at MiraCosta where he set a scoring record that still stands. Linfield University in McMinnville, Oregon, awarded Alan a basketball scholarship in 1970.

He graduated with a business administration degree, married Judy Hermens (also from Linfield) and moved to Oceanside. Here Alan worked for a mining company, and they welcomed a son.

The family returned to McMinnville in 1978 where Alan worked as a general contractor and land developer, building some high-end homes and buying land for a subdivision.

Alan’s new designs energized the building community, and he helped lead the Planning Commission. He also served eight years on the City Council, served as President of the Builders Board, was on the Chamber of Commerce Board, and is currently on the Habitat for Humanity Board. During this time, Alan began to mix small homes, duplexes, bungalows and townhomes with his trademark large homes. “Civility and Livability” defined his building as he worked to address the diverse housing needs of McMinnville. His projects also include principles from “Great Neighborhoods” such as parks, open spaces, natural features, and pedestrian and bike routes. Alan currently has 322 housing units in planning and building stages.

He continues to reside in McMinnville with Judy, and they enjoy their twenty-two grandchildren.