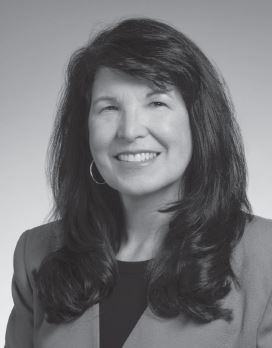 Courtney Rogers was an OHS Class of 1976 graduate and JROTC cadet.

Her father, Marine Aviator, Major Ralph Dryden, was killed in Vietnam in 1968.

After graduating with a degree in International Relations and Soviet Studies from the University of Southern California, she continued the tradition of military service by serving 14 years active duty as an Air Force Intelligence Officer, Targeting Officer, and Nuclear advisor to the National Command Authority aboard the EC-135 Looking Glass. She served on the ground during Operation Just Cause in Panama against then Dictator Manuel Noriega. She and her husband, Captain Mike Rogers, left active duty after their first daughter, Eryn, was born. Mike entered the private sector and Courtney transferred to the Tennessee Air National Guard assigned as the Aerial Port Squadron Commander and then retiring as the Wing Inspector General.

While in the Air National Guard, she took a position as Communications Manager for Bridgestone/Firestone North America Commercial Truck Tire Division. Following military retirement, Courtney was encouraged to run for political office. She served three terms in the Tennessee State House of Representatives (2012 – 2018) as Vice-Chair of the Transportation Committee and as a member of the Criminal Justice and Civil Justice Committees.

After retiring from the legislature on January 22nd, 2019, she was appointed to serve on Governor Bill Lee’s cabinet as Commissioner of Veteran Services for the State of Tennessee. She and her husband live in Sumner County, Tennessee and now have three children, Eryn, Michael, and Kellen.