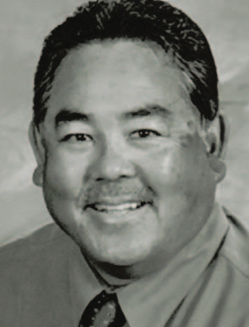 Best known for leading the first Oceanside Little League All-Star team to the 2001 Little League World Series in Williamsport, Pa., Daryl Wasano has long been a highly recognized and popular leader and supporter of youth sports in Oceanside. A 1973 graduate of OHS, Daryl was born in Oakland, Calif. He is considered a fourth generation of Japanese (Yonsei) descent. His great grandparents immigrated to Hawaii from Fukuoka, Japan.

A solid student athlete during his high school years, Daryl played both basketball and baseball for the Pirates. As a longtime community coach, Daryl has watched a number of his former players move on to Division I baseball programs and even the Major Leagues. While his 2001 Little League World Series team finished an impressive third overall in the tourney, Coach Wasano was most highly regarded for teaching his players an important life lesson in defeat. When it was later determined a team from New York had used a player “too old to participate,” Daryl respectfully communicated to his players the message that “life is not always fair” and to “move forward filled with great memories of a prestigious accomplishment” after advancing so far in their journey.

His humble and thoughtful approach in defeat earned him widespread respect from the Oceanside community. He also coached the 2006 Oceanside Little League Majors to a District 28 Tournament of Champions tournament title. Throughout his life, this highly respected coach has contributed in a variety of ways to the Oceanside American Little League, including serving nine seasons as a board member. Daryl also coached girls’ softball for six seasons at Tri City Christian School, leading the program to its first Division 5 Citrus League title. He is the proud father of four children: Jennifer, Brooke, Blake and Jacob. Daryl resides in Vista, serving as vice president of the La Costa 35 Athletic Club. He owns and operates Sumo Tackle, a manufacturer and supplier of fishing tackle products.