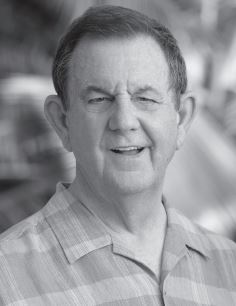 Doug was the quarterback of the 1963 OHS Pirate football team that won the school’s first state CIF championship. In his senior year Doug served as student body president.

He was a City of Oceanside lifeguard and also spent time as a lifeguard on Camp Pendleton where he often surfed at Trestles.

Doug attended Mira Costa College and received his Bachelor of Arts degree from San Diego State University in 1969. Early in his career Doug taught at the Carlsbad Army Navy Academy and owned an insurance agency in Oceanside.

He founded Benchmark Pacific, a land investment company in 1980. His company developed numerous housing projects in Carlsbad, which continue to set a high standard for livable communities. Doug was proud of his work with the City of San Marcos and state officials to site a new university,  CSU San Marcos, on land that was formerly the Prohoroff poultry farm.

Doug was a supporter of the OHS football team and the annual S.A.B.R.E. Awards.

He passed away on April 14, 2019 at home in Encinitas. He is survived by his wife Lori, children Tracie and Jake, and two grandsons. He is also survived by his sister, Kathy Green.