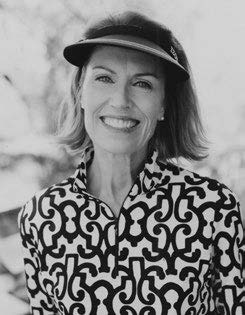 “For God so loved the world that He gave His one and only Son, that whoever believes in Him shall not perish, but have eternal life. For God did not send His Son into the world to condemn the world, but that the world through Him might be saved.” John 3:16,17

Holly learned these words as a youngster at the First Baptist Church in Oceanside where her family attended every Sunday. She was greatly impacted in those early years by the love of God shown her by her Sunday school teachers and at age 12 committed her life to Jesus Christ.

She attended Tulsa University on a golf scholarship after graduating from OHS. In 1976 she won the Los Angeles Women’s City Championship and was a First Team Collegiate All-American at the University of Tulsa in 1978. Holly turned professional in 1979 at age 22, playing professionally in the United States for 5 years and then competing on the Japanese LPGA for 5 years, winning two titles and representing Japan against the US in 1989.

In 1990, Holly married Ed Barth of Chicago, Illinois. After moving into a hurting community in Chicago, they realized that sports, especially baseball, could help keep children off the streets. Along with other families, they helped over 600 children who joined their baseball league. The children of the families that shared this vision all participated and learned through their varied experiences of the faithfulness of God. The Barths now partner with a group called “Breakthrough Urban Ministries” in the Garfield Park area of Chicago.

Holly is now in her 10th year coaching high school girls’ golf at St. Ignatius High School in Chicago. Her faith in Jesus Christ remains the focal point of her life. She thinks back to the time her OHS Golf Coach, Mr. Jim Jett, came to her home to tutor her in Geometry and has never forgotten the powerful and motivating influence teachers and coaches can have on their students.