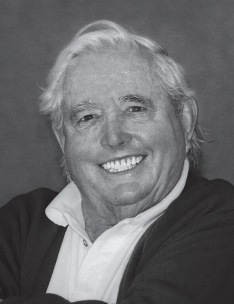 Jerrell D. Bussey, founder of Bussey’s Automotive Service, was a successful entrepreneur, even as a young boy. His family migrated to California in 1937, when he was nine years old, leaving the Oklahoma dust bowl for the promise of a better life in California. As the third of eight children, he had a strong desire to contribute to the well-being of the family, earning money by recycling bottles, harvesting sand crabs to sell to fisherman, selling newspapers, mowing lawns, and washing windows for businesses in Oceanside.

Jerrell loved his time at Oceanside High School, serving as the Associated Student Body President, an active athlete on the football, basketball, and baseball teams, and the piccolo player for the marching band. He received honors for most valuable athlete and most service to the school. In the OHS newspaper, a photograph of him carried the caption, “catch that million dollar smile.” Indeed, warm interactions with others and an optimistic attitude were his trademarks.

Immediately following his graduation in 1946, Jerrell married his high school sweetheart, Shirley Chandler. Across 69 years of marriage, they raised three daughters (all graduates of Oceanside High) and welcomed five grandchildren. In October 1946, Jerrell and Shirley worked side-by-side to open Bussey’s Automotive Service on Hill Street. A few years later, in 1952, they moved the business to Mission Avenue and it became a visible landmark off of US Interstate 5. Providing reliable and quality service, Jerrell considered it his responsibility to make sure families had safe transportation. Repeat customers were his best advertisers, along with the local radio station, they let others know: “Bussey’s is the place to go.”

Throughout his years in business, Jerrell knew the importance of giving back to the community. He made significant contributions to the Junior Chamber of Commerce, the OHS Booster Club, including donating to new lights for the football field, and the Oceanside Boys and Girls Club. He was a member of the Elks Club for over 57 years, where he helped to raise substantial resources for scholarships. Oceanside is very special to all of the Busseys. Jerrell and his family are thankful to be part of this community and to call Oceanside home. Mr. Bussey lived life to the fullest,  on May 28, 2017 after a long illness he passed away. He was just shy of his 89th birthday.