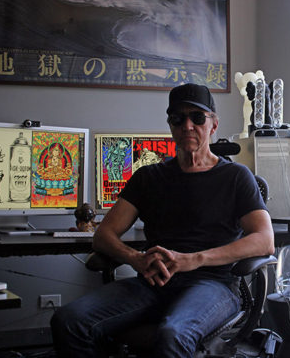 From early childhood Jim Evans knew he could draw, designing t-shirts for classmates at Mission Elementary School. He took up surfing and guitar at about the same time and competed in surfing contests as a member of the Tamarack Surfing Association. As a guitarist he had his own band “Me and The Others” performing for dances locally and along the California coast.

After graduating from OHS in 1965 he attended MiraCosta College and the California Institute of the Arts and Art Center College of Design. Art became his major focus, lthough he stayed close to the music scene designing the logo for the Grammy Awards in 1989. Jim initially did a cartoon strip that was syndicated by the Los Angeles Free Press and ran in underground newspapers. This exposure led to commissions for nationally syndicated comic books.

In Hawaii Jim surfed and did illustrations in surfing magazines and underground newspapers and worked for legendary Hawaiian singer Don Ho, Hawaiian Airlines and Dole Pineapple. Upon his return to the mainland Jim created artwork, logos and album covers for the Beach Boys, the Beastie Boys, Alice Coltrane, The Allman Brothers, Toto, and more. A transition into fine arts led Jim to a series of limited edition pop portraits of Sylvester Stallone, Madonna, Marilyn Monroe, Elvis Presley, Frank Sinatra, Arnold Schwarzenegger, and Robert Mitchum. This culminated with a show at the Hanson Gallery on Rodeo Drive in Hollywood.

Settling in Malibu, California, Jim got involved in the film industry doing posters and title sequences. By the end of the 1980’s with his son, Jim returned to his roots in rock music, turning out hundreds of limited-edition posters for bands as diverse as U2, Pearl Jam and Metallica.