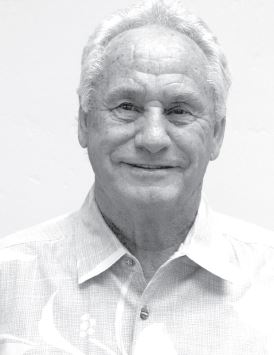 John “L.J.” Richards was born and raised in Oceanside. Living just a few blocks from the beach, at the age of twelve L.J. joined the Junior Life Guards, which began a lifelong passion for the ocean. At the age of 13, his mother gave him his first surfboard; later he became a founding member of the Oceanside Surf Club. During his surfing career he was featured in several surf films produced by Bud Brown, Bruce Brown, Greg Noll, John Severson and Grant Roloff.

His search for waves has taken L.J. all over the world: Hawaii, Australia, Tahiti, France, Mexico, Indonesia, Fiji, and Costa Rica. By the 1960’s he was already considered a surf legend. In 1963, L.J. was the West Coast Surfing Champion; this being followed by second place in the United States Invitational. In 1964 he was invited to the inaugural World Championship in Sydney, Australia where he finished fourth.

Throughout his lifetime L.J. has worked as a Lifeguard for the State of California and as a fireman for the Encinitas Fire Department. L.J’s accomplishments include: being the first recipient of the LeRoy Grannis Waterman’s Award; induction into the International Surfing Hall of Fame and inclusion in the Surfing Walk of Fame in Huntington Beach, California. He is especially proud of his 26-year affiliation with UCSD’s Luau & Legends of Surfing Fundraiser for Cancer Research, which has raised millions of dollars.

L.J. is retired; he and his wife, Kim, reside in Carlsbad. They have three daughters and nine grandchildren.