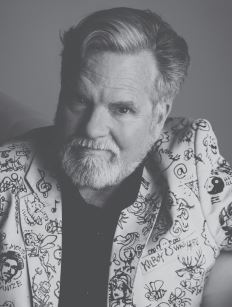 Patrick Bagley was born in Salt Lake City, Utah, in 1956,  but the family soon moved so his father, Larry Bagley, could take a job in the Oceanside City Planning Department.  Larry would work his way to become City Manager and later serve three terms as Mayor. Pat’s mother earned a degree in education and for decades taught Oceanside’s young.

Politics and learning were a household staple. Pat and his two older brothers, Will and Kevin, and a younger sister, Lisa, grew up surrounded by books, magazines, newspapers and news programs; lively discussions around the dinner table about world, national and local events were common.

Pat’s father had this quirk: he would often watch the evening news with pen and paper and do quick sketches of the people on TV. Assuming everyone’s father did the same and that it was just something people do, Pat started drawing.

He was known to friends and teachers at OHS as a talented and clever artist. Later, at Brigham Young University, he would incorporate politics into his art and become the staff cartoonist for the student newspaper. In fact, the first cartoon he drew for The Daily Universe was reprinted in Time Magazine.

Pat was hired by The Salt Lake Tribune in 1979 and for the next 40 years would produce 12,000 cartoons and become an institution in Utah politics. He’s won several major awards, including the Herblock Prize, and was a finalist for the Pulitzer Prize.

He has two adult children, Miles and Alec, daughters-in-law, Karina and Sarah, and a grandson, Ulysses. Kate Hahn is his life-companion and muse.