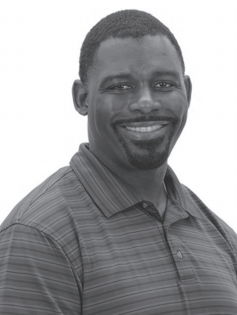 I was born in South Carolina to Lawrence and Edith Vaughn. My father was in the Marine Corp and eventually we were stationed at Camp Pendleton. At OHS, I starred as a football running back and a center fielder on the baseball team. After graduation in 1990, I was drafted by the New York Yankees organization but elected to accept a football scholarship to play college football in the PAC 10 at the University of Arizona. I started at wide receiver as a true freshman at UA earning freshman All-American honors as a punt returner and receiver. As a sophomore, I earned All-PAC-10 honors as a punt returner and ranked in the top 10 nationally.

I suffered an injury at the end of the season but was able to return as a starter my junior and senior years. I left UA ranked in the top 10 as a receiver and punt returner. I signed as an undrafted free agent by the NFL Arizona Cardinals football team and made the team as a practice player, was later released and signed with the Calgary Stampeders in the Canadian Football league. I was known as a powerful runner who was great at catching the ball and breaking tackles in the open field. In my first season as a CFL receiver, I had 1,031 receiving yards and it would be the first of 11 straight seasons with over 1,000 yards receiving.

I reside in Chandler, Arizona with my wife Carsandera, daughters Tristen and Sydney and son, Zion.