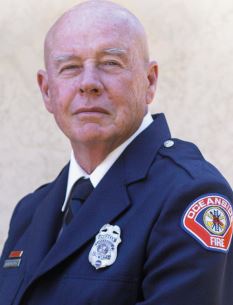 We moved to Oceanside in 1959 when my father became the program director of KUDE 1320AM. As a teenager, I worked at the Mayfair Market where I enjoyed helping people. While attending MiraCosta Junior College, I would talk to Oceanside Firefighters while they shopped for daily supplies.

It was during this time that I became interested in firefighting as a career. Carlsbad still had a volunteer firefighter program, which I joined in 1969. San Diego offered me a job and I began my career at the downtown Station One. This was a big city fire department with 21 firefighters on duty, but my heart was still with Oceanside.

In 1973 I became a firefighter with the Oceanside Fire Department. Many changes were coming to the fire service at that time. Dr. Thatcher started an EMT class for OFD when the fire department had taken over the ambulance service. In 1975 a federal grant was given to Oceanside to send ten firefighters to UCSD for paramedic level training; I was one of those firefighters.

After completion I was on the crew that placed the first Mobile Intensive Care Unit (MICU) in service in the county. In 1985 I was promoted to fire engineer, and was active in training and testing new fire engineers. I also worked on the design of new fire stations and new apparatus, fire demonstrations, open houses, and volunteered my time at elementary schools. In 2005 I received the Service Award from our Fire Chief.

Today I enjoy spending time with my wife Elise, my daughter and son, and our four grandchildren.