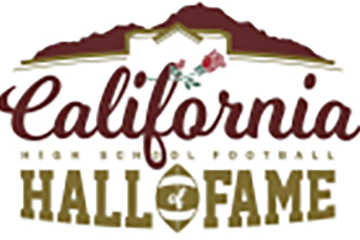 It is with great pride that we write to you with CONGRATULATIONS for being elected in the inaugural class of the California High School Football Hall of Fame.

Your candidacy was reviewed by 26 state-wide media members and High School Football administrators, and you will be enshrined in the first class ever – the inaugural class will include 100 players (to symbolize the 100th anniversary of the Rose Bowl Stadium) and 13 coaches.

With the California Interscholastic Federation (CIF) and National Football Foundation (NFF) playing a role in conjunction with the Rose Bowl Legacy Foundation, the project will continue to shine a light on the key contributors to High School Football in the Golden State.

The Hall of Fame, which is the first of its kind in the State of California, will be established at the Rose Bowl Stadium in Pasadena.  A full list of inductees is attached and is also posted at the following website: www.CAhighschoolfootballhof.com.